A Cat in Paris 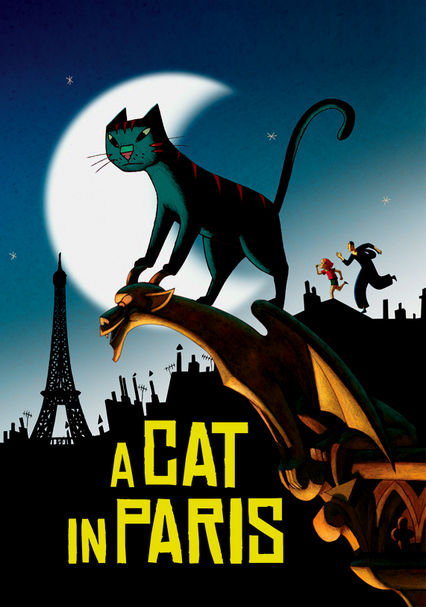 A Cat in Paris

2010 PG 1h 5m Blu-ray / DVD
In this Oscar-nominated animated feature, little Zoe discovers that her cat, Dino, moonlights as the companion to Nico, a burglar with a heart of gold. Soon Zoe is drawn into a thriller filled with gangsters, jewels and the rooftops of Paris.

Parents need to know that A Cat in Paris is a French animated drama that was nominated for an Academy Award in 2012 and was subsequently dubbed in English. With its cops vs. robbers plot and several gripping action sequences -- not to mention a story that touches on grief, loneliness, moral ambiguity, betrayal, and revenge -- it's not ideal for preschoolers used to lighter cartoon fare. The violence includes gunfire, hallucinations, a man plunging to his death, and a woman who betrays a little girl's trust and then places her in harm's way. Some children will also be disturbed by the fact that Dino (the titular cat) routinely hunts and kills lizards. With a couple of exceptions, the characters are all flawed, and since the story is set in Paris, adults smoke and drink wine and Champagne.

Costa and Claudine are affectionate with each other, and he calls her his pet. A male nude statue has a penis.

Although none of the violence is without consequence, there are several suspenseful action sequences, one of which results in a death. A character is accused of slowly poisoning people with her "perfume." A crime boss is a terrible shot and can't kill a spider with his handgun. The central cat kills lizards, and it's considered a good thing. A character falls to his death after a hallucination that brings Notre Dame Cathedral gargoyles to life in a scary manner. Zoe's mother Jeanne has frightening nightmares about the man who killed her husband; she imagines him as a menacing giant octopus. A barking dog is squashed but then is shown barking again.

A Cat in Paris isn't heavy handed with messages, but there are a few that stand out: People are complicated, a thief may actually be ethical, and a seemingly kind woman might actually have less honorable intentions. Communication is beyond the verbal: Zoe can get her point across even without speaking. Family is ultimately more important than work.

It's France -- there's Champagne and wine at a dinner scene, and one character smokes a cigarette.