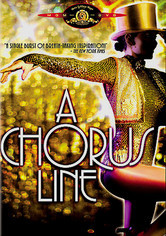 1985 PG-13 1h 58m DVD
Based on the smash hit Broadway musical with a score by Marvin Hamlisch and starring Michael Douglas, A Chorus Line tells the story of a group of young dancers auditioning for a part in a new show. It includes such song hits as "What I Did for Love," "Dance 10, Looks 3" and "At the Ballet." The stage version won many Tony Awards and even a Pulitzer Prize.