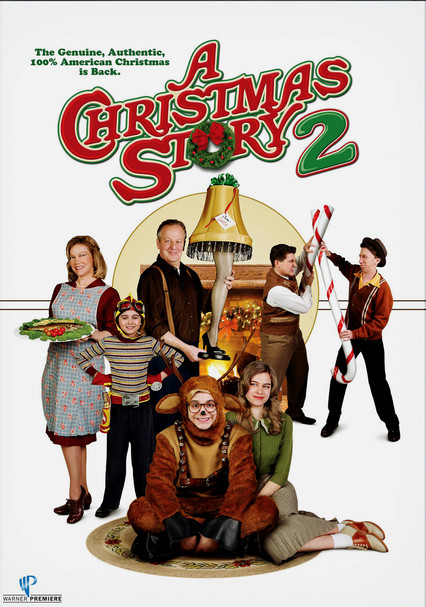 2012 PG 1h 25m DVD
Now a teen, determined kid Ralphie accidentally wrecks his dream car while it's still at the dealer's lot! He and his pals Flick and Schwartz try to raise money to fix it by Christmas Eve, before the car dealer can report the incident to the cops.

Parents need to know that A Christmas Story 2 is the sequel to the classic 1983 period comedy, A Christmas Story. The language is fairly strong for a family film -- several instances of "son of a bitch," for example, and deals more with adolescent attraction (Ralphie is smitten with the prettiest girl in his class) than the original. Otherwise there's the standard physical comedy and silly jokes that will make kids laugh aloud. Like with the first Christmas Story, the overarching message is that no matter what you get, the important thing about the holidays is spending them with family.

Ralphie has a crush on a classmate and daydreams about taking her for a drive in his new car and pretending she's "his girl."

Ralphie has a dream that references Nazis (but not violently), and there are some physical comedy sequences like when Ralphie accidentally crashes a car for sale at the dealership, or Ralphie and his friends wreak havoc on a department store where they work. Although his friend doesn't get his tongue frozen to a pole, he does get his tongue sucked into a vacuum pipe.

The word "bitch" and specifically "son of a bitch" is used several times throughout the movie.

Like the first movie, this is a comedic look at an idiosyncratic family's Christmas experience. Family togetherness -- even when things are going all wrong -- is what's most important during Christmas.

The Christmas Story tale is now a Broadway musical and the leg lamp is available as a novelty gift.