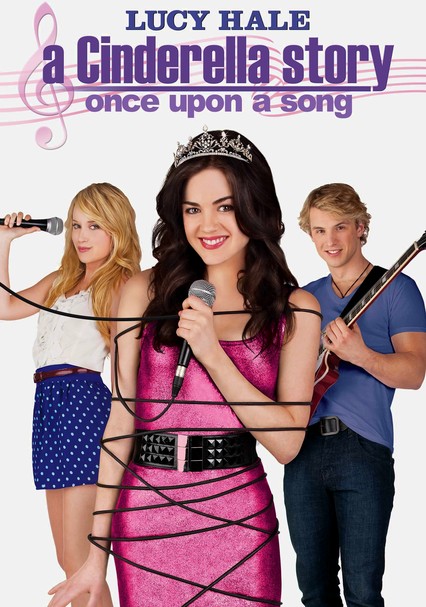 2011 PG 1h 28m DVD
In this modern telling of the classic tale, aspiring singer Katie Gibbs falls for the new boy at her performing arts high school. But Katie's wicked stepmother and stepsister are scheming to crush her dream before she can sing her way into his heart.

Parents need to know that this is the third take on a familiar tale, A Cinderella Story. Like the first two movies, this one follows a talented-but-put-upon Cinderella stand-in who lives under the tyrannical rule of a mean stepmother. The teen romance is mild and only includes two sweet kisses, but the protagonist endures quite a lot of emotional -- and verbal -- abuse from her humorous-but-cruel parental figure. The stepmother character, however, gets hers in the end, and at the very least, this Cinderella has unexpected allies who help her triumph.

Teens go out on a date and nearly kiss. Another couple flirts and ends up sharing a couple of kisses. The word "hot" is used a few times to describe girls. In one scene, a prank leaves a girl naked, but viewers only see her shoulders and legs. A boy makes jokes about "partial nudity."

An adult is briefly electrocuted, but she's not seriously hurt. A boy throws things at his teen stepsister and plays some malicious pranks on her.

Some insults like "idiots," "freakin'," "stupid," and "crap." The stepmother makes cruel comments about nearly everyone. She calls her daughter "untalented" and tells her stepdaughter that she'll never amount to anything. The stepmother also calls a girl "an Asian dwarf" and pretty much says something unkind every time she speaks. Her own young son calls her a "beeyotch."

The movie's central message (other than that cruelty will eventually be repaid by justice) is that you should never be afraid to follow your passion or use your gifts. Both Katie and Luke are suppressed by controlling (and in Katie's case abusive) guardians, but they persevere and are eventually able to show off their musical talent.

An iPhone is shown in a couple of scenes. A mention of YouTube and other ways that musicians hit it big.

Gail likes her cocktails and in one scene acts drunk and then demands that Katie make her a "vodka tonic, hold the tonic."