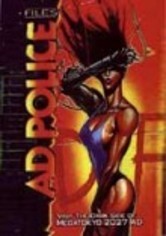 1990 NR 1h 12m DVD
This anime series explains the events that led to the Bubblegum Crisis. Leon and his cop colleagues finally meet their ultimate nemesis -- the Boomers, cyborgs that were devised to help humans but inevitably became yet another weapon of mass destruction. Episodes include "File 1," in which Leon tries to figure out why Boomers are malfunctioning; "File 2," where the police investigate mysterious deaths; and "File 3," where a cop turns bad.