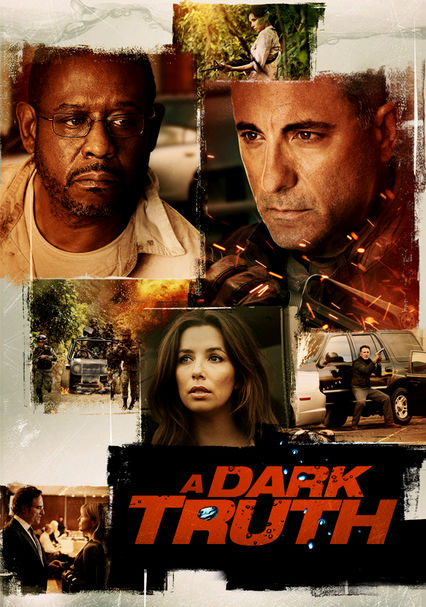 2012 R 1h 46m DVD
To expose a bloody corporate cover-up, a former CIA agent now talk radio host (Andy Garcia) must rescue a desperate activist (Forest Whitaker) and his wife (Eva Longoria) who have escaped with proof of the crime.

Parents need to know that the bad guys in A Dark Truth are business executives trying to hide a huge blunder that left an entire South American village massacred. They'll stop at nothing to keep the truth buried, but ex-CIA operative Jack Begosian (Andy Garcia) is just as determined to expose them. Expect plenty of violence in this corporate thriller, including a few disturbing images of people being shot and stabbed, as well as the central massacres, an unexpected suicide, and suggested rape. Language is infrequent but includes "bulls--t"; there's some drinking and smoking and a few product placements.

Plenty of people die -- in shootouts and hand-to-hand combat, via self-inflicted gunshots, and in two massacres of innocent civilians by soldiers. There's a good bit of blood and a few close-ups of people being killed, including an unexpected suicide. One scene features soldiers about to rape a young woman.

The movie's main take-away is that corporate greed is taking over the world, and faceless multinational conglomerates will do whatever it takes to make sure their deals go through -- even if they have to massacre an entire village to hide a deadly accident. On the other hand, some characters do try to do the right thing, even if doing the right thing is dangerous.

Some well-known brands are visible, including a Ford SUV and an Apple laptop. The movie's whole premise is that corporate greed is destroying the world.

One person drinks a beer in a bar; another smokes an occasional cigarette.