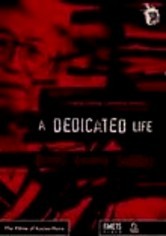 1994 NR 2h 37m DVD
Venerated filmmaker Kazou Hara trains his lens on author Mitsuharu Inoue -- whose sociopolitical novel &NFiChi No Mure&NFi_; earned high praise from literary critics -- in this compelling documentary filmed as he copes with terminal cancer. From Inoue's communist beliefs to his controversial works, Hara paints a double-edged portrait of a maverick writer admired by students and peers -- who was also a brazen liar and shameless skirt chaser.