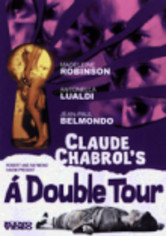 1961 NR 1h 50m DVD
An illicit affair leads to murder in Claude Chabrol's complex crime drama. When wealthy vintner Henri's (Jacques Dacqmine) mistress (Antonella Lualdi) is killed, the police suspect the milkman. But Laszlo (Jean-Paul Belmondo), the boyfriend of Henri's daughter, isn't sure the mystery is so easily solved. Could the real culprit be Henri's shrewish wife, Therese (Madeleine Robinson, in an award-winning performance), or his unstable son?