A Fantasy of Passion 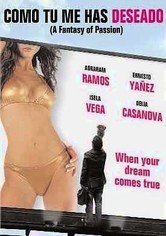 A Fantasy of Passion

2005 NR 1h 38m DVD
Enter the exotic world of ad executive Anibal Soler in this dark romantic comedy chronicling the "love affair" between the ad man and a beautiful billboard model whom he hallucinates is flirting with him. Not surprisingly, Soler's work and personal life suffer as he grapples with this alternative reality. Ernesto Yáñez, Isela Vega and Delia Casanova star in Mexican director Juan Andrés Bueno's first feature film in more than a decade.