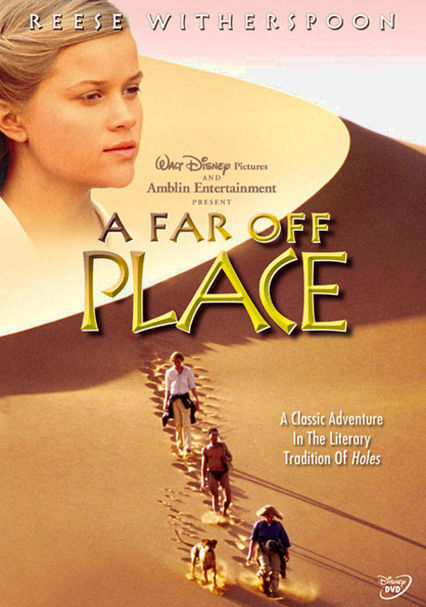 1993 PG 1h 47m DVD
Nonnie Parker (Reese Witherspoon), an African game warden's daughter, and city slicker Harry Winslow (Ethan Embry) are thrown together by tragedy when they witness a massacre on an isolated savannah. The only way they can get help is to traverse the Kalahari Desert on foot. Aided on the journey by a bushman named Xhabbo, they grow to lean on each other and discover that they need each other to make it through these unusual circumstances alive.

Parents need to know that sensitive animal lovers need to proceed with caution in the first scene where poachers kill elephants and saw off their tusks. More disturbing is the murder of the teen leads' parents -- a main character sees them after they are shot and dynamites the murderers' cars. As the main characters flee for their lives (and are shot at more than once) they learn to work together to survive and deal with their loss. Nonnie is a strong teen character girls will love.

Right off the bat viewers see elephants shot by poachers and tusks sawed off; a baby elephant survives and prods at the dead elephants around him. The poachers are then shot by the game warden. Nonnie sees her parents and Harry's dad after they are shot; one corpse is in bed and another is on the floor in a pool of blood. Dynamite explodes in a few scenes with some casualties. Nonnie, Harry, and Xhabbo run for their lives in the desert and are almost killed by gunfire. Their dog is attacked by a pack of dogs but survives. Xhabbo gets bitten by a scorpion.

Dealing with loss, respecting wildlife, and overcoming great odds to survive resonate here. There's not a big divide among Africans and white people here like in some other movies with similar themes; the main bad guys are white, some poachers are African, and the main protagonists are white but travel with an African whom they respect greatly.

An adult smokes in one scene.