A Feast of Steam: Including 100 British Locomotives 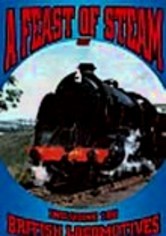 A Feast of Steam: Including 100 British Locomotives

2006 NR 0h 58m DVD
If you're hungry for steam, this one-stop feast of footage showcasing 100 varieties of British steam locomotives is the meal for you. Featured trains include examples from industrial, narrow gauge and British Railway standard classes, plus representative models from the "Big Four": the Great Western Railway; the London, Midland and Scottish Railway; the London and North Eastern Railway; and the Southern Railway.