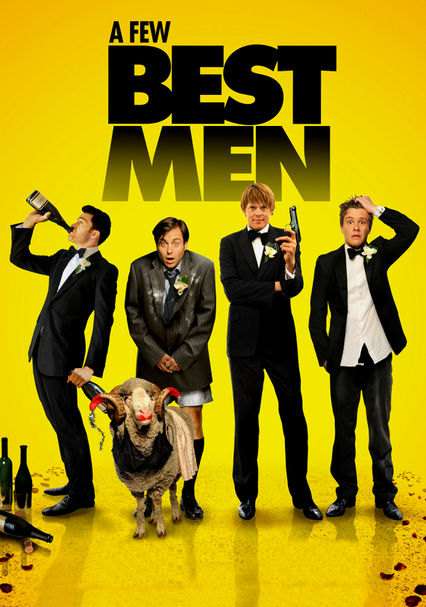 2014 NR 1h 37m DVD
When David unexpectedly gets engaged during a whirlwind vacation, his best friends are determined to send him off into married life in signature style. But when they arrive in Australia, the nuptial plans go from bad to worse as the guys discover that unpredictable relatives, a cross-dressing sheep and a deranged drug dealer don't necessarily equate to a match made in heaven.

Parents need to know that A Few Best Men is an incredibly vulgar and obnoxious Australian comedy about a wedding that goes horribly awry. Teens may be interested since it features Rebel Wilson, but it's definitely not appropriate for kids. Characters use cocaine, marijuana, and alcohol to excess and are often drunk or high. A character threatens to kill himself with a gun and then accidentally shoots his friend in the arm. When a beloved ram eats drugs sealed in baggies, characters give the ram laxatives to force it to defecate the drugs -- and when they're caught doing this, it looks like they're trying to have sex with the ram. We see naked male buttocks. The profanity is frequent and unrelenting; besides "f--k," pretty much every other type of profanity is used. If there was more of a real comedic payoff for all this over-the-top crassness, maybe it would be worthwhile for adults, but its vulgarity is only matched by its triteness.

Naked male buttocks. Frequent discussion of sex. Characters walk in on other characters who look like they're in the midst of having sex with a ram. A man brings a leather "gimp mask" with him from England to a wedding party in Australia; he later wakes up to find it stuck on his face.

A character threatens to kill himself with a gun and then accidentally shoots his friend in the arm. An angry drug dealer shows up at a wedding party with a rifle; he sticks the rifle into the mouth of one of the characters. Characters are injured when a giant cylindrical floral arrangement rolls down a hill and into a wedding party.

Frequent and unrelenting profanity of every kind and variation. Constant use of "f--k." Mention of a woman's "front bottom burps."

The bonds of friendship through thick and thin. Love triumphs over adversity.

Characters use cocaine, marijuana, and alcohol to excess and often are very drunk. Two characters buy marijuana from a drug dealer. One of these characters accidentally takes the drug dealer's duffel bag -- filled with drugs and a gun -- to a wedding. A beloved ram who lives on the property ends up eating the drugs contained in plastic baggies, and the characters fill the ram with laxatives so the ram will defecate the drugs. One of the characters wakes up from the bachelor party with a joint wedged between his buttocks.