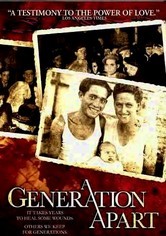 1984 NR 0h 56m DVD
Filmmaker Jack Fisher recounts the story of his parents' miraculous survival from Nazi death camps and examines the intergenerational conflicts that inevitably grew between the parents and their progeny. The 1984 documentary, which originally aired on PBS, explores the wounds of the Holocaust with striking candor and poignancy. Bonus features include a commentary with the director and his father, as well a newly filmed epilogue.