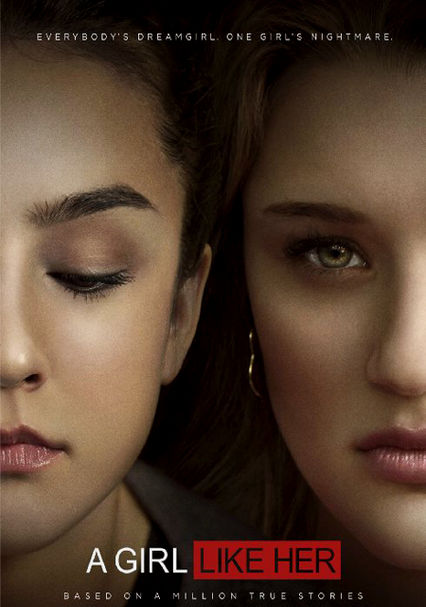 Parents need to know that A Girl Like Her is a fictionalized documentary-style film about two teen girls: a high school sophomore who attempts suicide and the other 16-year-old who's revealed to be her bully. Unlike the actual documentary Bully, which followed several students across the country dealing with bullying, this movie looks at things from the bully's perspective -- after the victim is in the hospital. There's some strong language (most uses of words like "bitch" and "f--k" are bleeped, but "ass," "whore," "slut," "stupid," "douche," etc. aren't) and disturbing scenes of the attempted suicide, the bullying that led to it, and the hospitalized teen. The movie is uncomfortable and upsetting to watch at times, especially during the recorded footage of the constant insults, threats, and ridiculing that convinced the victim that her life wasn't worth living. But A Girl Like Her also provides a much-needed way to engage tweens and teens in thinking and talking about the subject of bullying (from either side) and how to stand up to it -- or at least inform someone about what's going on.

Attempted teen suicide (via pill overdose), plus disturbing scenes in the hospital of Jessica comatose and her parents weeping. Also an extended video of all the ways that Avery terrorized Jessica with threats, pranks, and insults. Avery and her friends yell at a girl who tries to use "their" bathroom in the school; they insult lots of people they don't find worthy.

Some of the language is bleeped out at first, although it's obvious characters are saying "f--k," "bitch," etc. Other times the words are said without bleeping: "bitch," "bitches," "psycho," "whore," "stupid," "slut," "what the hell," "what the f--k," "douchebag." Also mean/threatening language and texts, like "loser," "everyone hates you," "just go die," "stupid ass," "you are f--king with the wrong girl," "Who picked out your outfit, your grandma? Oh that's right, your grandma is dead," and more.

Makes the powerful, important point that the issue of bullying is pervasive and can often affect kids to the point of suicide. Explores the topic from both sides, showing how destructive it is and how difficult it can be for teens to admit that they or their friends are being bullied. By looking at both sides, the movie humanizes bullies and makes it clear that usually they're hurting, too, and don't know how to deal with their pain except by belittling others. The bullies are more likely to lie than to tell the truth about their role/guilt.

Prescription sleeping pills are taken during a suicide attempt.