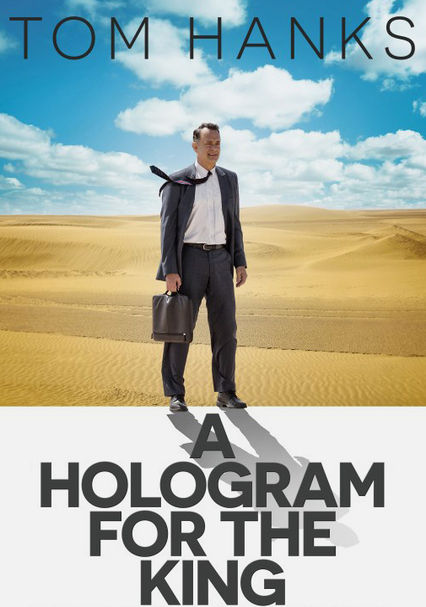 2016 R 1h 37m Blu-ray / DVD
Teetering on the edge of bankruptcy, U.S. businessman Alan Clay tries to reverse his fortunes by landing a lucrative contract in Saudi Arabia. As Alan attempts to navigate his way through an unfamiliar culture, he unexpectedly finds romance.

Parents need to know that A Hologram for the King, which is based on Dave Eggers' same-named novel, chronicles the life of a depressed salesman (Tom Hanks) who's trying to stay upbeat enough to make a killing on a sales trip to Saudi Arabia. Alcohol is officially forbidden there, but many overindulge in black-market drinks -- and the salesman pays the price with hangovers. He has one alcohol-fueled sexual encounter (no nudity) but is ultimately unable to perform; in another scene he has sex with another woman who swims topless. Expect to hear the words "s--t" and "a--hole"; one scene implies cocaine use, and there's a bloody beating.

Drunk adults in bathing suits/with shirts off kiss and embrace at a party. A woman takes off her dress (no graphic nudity) and throws herself on a man, but he can't complete the sex act. A woman swims underwater wearing only swimming trunks. A man and woman have sex; passionate kissing is shown. A driver refers to a married man who "has sex with boys."

Several men beat someone; some blood is seen. Men set out to hunt wolves, but none are shot. Armed rebellion is discussed. Alan tries to lance a growth on his back; blood is seen on his sheets.

Even when a situation seems at its worst, there's still a chance it all can improve. So you might as well keep trying.

Starbucks, KFC, and Schwinn bicycles are all mentioned.

Alcohol is against the law in Saudi Arabia, but many adults are shown drinking wine, beer, and liquor to excess. Hangovers. Cigarette smoking. The camera passes through a room in which a man is seen snorting what's presumably cocaine.