A King and His Movie 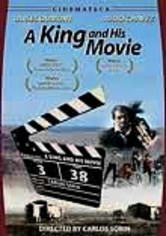 A King and His Movie

1986 NR 1h 40m DVD
Ulises Dumont, Villanueva Cosse and Miguel Dedovich star in this offbeat tale about a director trying to film a movie about the King of Patagonia. Eager to make the most important film of his career, Chaves keeps running into serious setbacks. He dodges the press, hires locals as actors and eventually loses financial backing. But even after the entire cast quits, Chaves refuses to give in, finding an innovative way to complete his masterpiece.