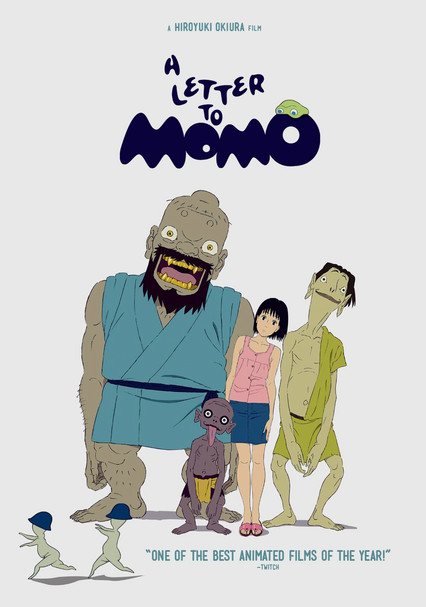 2014 NR 2h 0m DVD
Momo Miyaura is a shy 11-year-old trying to cope with her father's recent death and her family's move to the country. Her new life becomes even stranger when she discovers three hungry goblins living in her attic.

Parents need to know that A Letter to Momo is an anime film about an 11-year-old girl who moves from Tokyo to a small Japanese island with her mother after her father is killed (it's talked about but not shown). It's in Japanese with English subtitles, which means it's a better fit for kids who are already strong readers (unless you're up for reading it all aloud!). Plus, younger kids might find the imps that live in Momo's attic a little scary: They first appear as shadows and then fully drawn figures that only Momo can see. There's a harrowing scene at the end of the movie involving an army of imps that forms a shield over Momo when she races to get a doctor for her asthmatic mother during a typhoon.

Younger kids might find the imps (or goblins) a little scary. They first appear as shadows following Momo and then as fully drawn characters. They often come up and scare her. One of them pushes her off of a platform into the water (to help her get over her fear of jumping in). Momo and the imps are chased by a wild boar. Momo's mother has an asthma attack and needs a doctor, but there's a typhoon raging outside, and the doctor is on another island. An army of imps comes to her rescue, making a shield as she races over an unfinished bridge.

No strong language, but the imps are little rude.

The movie deals with parent-child relationships in a way that could be distressing for younger kids -- Momo feels terrible that her last interaction with her father was telling him to never come back -- but ultimately there's comforting closure.