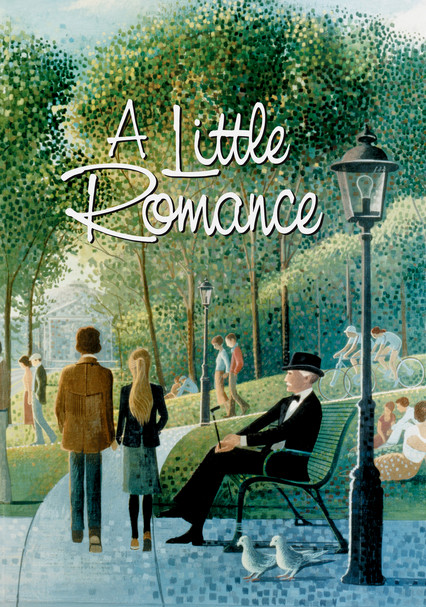 1979 PG 1h 50m DVD
Diane Lane stars as Lauren, a young American girl whose love of books finds a soul mate in Daniel (Thelonious Bernard) -- and romance blossoms. When Daniel slugs the egomaniacal director boyfriend of Lauren's self-absorbed actress mother (Sally Kellerman), the two are forbidden to date. But with the help of an aging pickpocket (engagingly played by Laurence Olivier), the two young lovers run off to Venice and spark an international chase.

Parents need to know that this love story about two very young teens includes a few gentle kisses that seem appropriate for their age and level of maturity. The romantic leads disobey their parents, but not without guilt and consequences; they also sneak off with a bottle of champagne, but it doesn't turn into a drunken spectacle. Some kids start to watch a pornographic film, however, the movie is not seen and is identified only by the reaction of the teens and the sounds of some heavy breathing and moaning. Several nude male sculptures are on display in a Paris museum. Occasional swearing is heard (i.e. "hell," "boobs," "bastards," "Jesus Christ,"). Adults drink wine and champagne in moderation on several occasions. Action scenes are restricted to one punch, a collision during a foot chase, and short clips from old movies.

No actual sexual activity or nudity, but some innuendo or sexual language ("get laid"). Two young teens in love kiss several times. Boys ogle a well-endowed woman; one of them is fascinated by female breasts. It's quite clear that a group of young teens in a movie theater projection room is watching a pornographic film; we see only their reaction and hear some mild heavy breathing and moaning. A movie poster shows a man in bulging underwear. Statues in a Paris art museum show male genitals, resulting in reactions from two girls: "Have you ever seen a real one?" and "Have you ever done it?" There are hints of marital infidelity; a mother flirts openly with a friend in front of her husband and daughter.

The primary action comes from brief clips of classic American movies: Butch Cassidy and the Sundance Kid (Butch and Sundance jump from a cliff), True Grit (John Wayne in a chase on horseback with guns blazing), and The Sting (in a wide shot, a bullet hits a character in the back; he drops). In the movie itself, the male teen protagonist punches an obnoxious movie director in the stomach and accidentally knocks down an elderly man.

Two kids who feel isolated because of their hyper-intelligence and unusual interests find that it's okay to be different, and learn that there are like-minded others with whom they can form wonderful friendships. Initial judgments based on appearances and superficial qualities can be misleading; people are often not what they seem to be and may surprise. And finally, the best parent-child relationships are a result of trust, honesty, and mutual respect.

McDonald's, Kodak -- both in the context of the story.

At a party four young teens sneak a bottle of champagne to the birthday girl's bedroom and drink it to celebrate; one of the girls gets tipsy. Adults consume wine and champagne in several social settings. The father of the young French hero is shown drinking whiskey; the implication is that he may be a man who drinks too much. A young Parisian boy smokes.