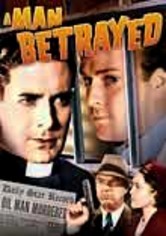 1936 NR 0h 53m DVD
Oil executive Frank Powell (Eddie Nugent) thinks he's living the high life until he learns that his crooked partners have swindled him. When one of his shifty cohorts commits suicide, the others frame Frank, making the death look like a murder and pinning it on him. Now, Frank's only hope lies with a crew of hoodlums and a secret piece of evidence that only the dead man knew about. An undiscovered ace of the crime genre, John H. Auer, directs.