A Matter of Principle 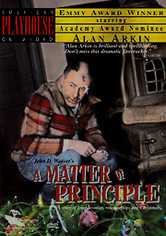 A Matter of Principle

1984 NR 0h 56m DVD
Writer John D. Weaver's story serves as inspiration for this family drama about a father (Alan Arkin) whose rules are hard to live by, even by the standards of his wife (Barbara Dana) and children. With 11 mouths to feed, he decides that the only way to survive the holidays financially is to ignore them. But when his put-upon spouse can no longer stand his Grinchlike behavior, she deserts him, leaving him to wrestle with his so-called principles.