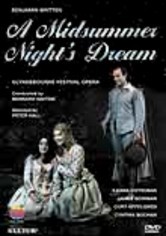 1981 NR 2h 36m DVD
This expertly modified, operatic version of Shakespeare's beloved comedy tracks the exploits of two pairs of lovers and an additional cast of quirky characters as they come across the bickering fairy king and queen, Oberon and Titania, one summer evening. The striking stage production breathes new life into the tale, making the set itself come alive to further enhance the story. Stars Felicity Lott, Ileana Cotrubas and James Bowman.