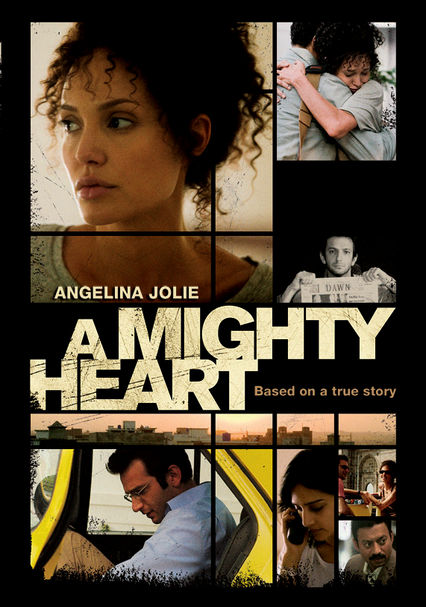 2007 R 1h 48m Blu-ray / DVD
While in Pakistan researching a story on shoe bomber Richard Reid in 2002, Wall Street Journal reporter Daniel Pearl is suddenly kidnapped, prompting his pregnant wife to launch a desperate search to find him in this riveting drama.

Parents need to know that this docudrama probably won't interest the majority of kids -- only the most mature teens will want to see the story of a woman's mission to save her kidnapped husband. But since Angelina Jolie is the star, and the story of Daniel Pearl's abduction and videotaped murder has been widely reported, some tweens/young teens might be curious. While the actual killing isn't shown, snippets of the preceding video are, as are photos of Danny in captivity and images of suspects being briefly tortured while interrogated. There's also a great deal of harsh language ("f--k," "s--t", etc.), almost all prompted by despair and anger at Danny's capture and death.

A discreet flashback of Mariane and Danny making love, cuddling in bed, and dancing at a club. They also hug and kiss each other the day he's abducted.

Disturbing photos and video of both a captured Danny and suspects being tortured during police interrogations; upsetting pivotal scene in which a group watches the footage of Danny's murder. Mariane cries and screams when she finds out her husband's fate.

Many uses of "f--k" after Mariane and her friends find out Danny has been abducted and then killed (pretty understandable given the context). Other curses include "s--t," "a--hole," etc.

Mariane and her friends, Danny's co-workers, bravely aid Pakistani police in the search for the kidnapped Danny.

Wine at a couple of dinner parties.