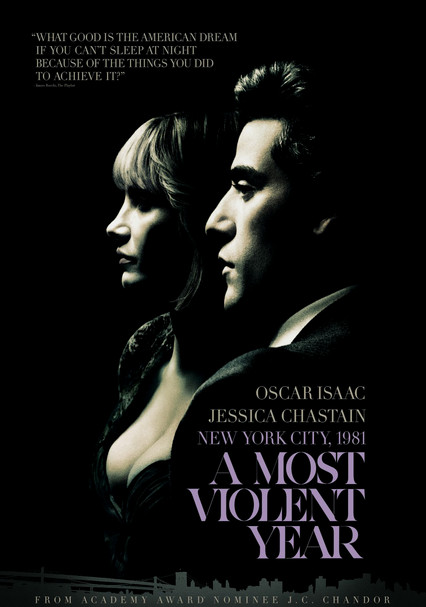 2014 R 2h 5m Blu-ray / DVD
Amid New York City's crime-filled winter of 1981, immigrant Abel Morales and his wife try to operate a successful business, only to see their efforts threatened by the lawless atmosphere permeating the streets.

Parents need to know that A Most Violent Year lives up to its name, with several brutal beatings. Set in 1981 New York, one of the city's roughest periods, this taut thriller centers on a successful immigrant whose rivals are trying to run him out of business; his trucks are hijacked and his drivers cruelly attacked. There's a shoot-out in the middle of the day, gun threats, and realistic fight scenes that leave people bloodied, battered, and scared. Language isn't constant, but the words are strong, including "f--k" and "p---y." Expect a little kissing/embracing and some revealing outfits; characters drink socially, and a lot of them smoke -- which wasn't unusual for the time.

A woman wears a revealing dress. A couple embraces and kisses.

A trucking company is hijacked repeatedly; the drivers are violently beaten. One arms himself, and an attempted hijacking becomes a shoot-out in the middle of the day on a crowded city street. A man chases one of the hijackers for many blocks on foot, eventually catching him, beating him severely, and threatening him with a gun.

Abel works hard and rises to the top, but the backdrop to this is a gritty, violent world in which people are targeted for being too successful.

Some social drinking during meals and at home. Many characters smoke cigarettes (accurate for the era).