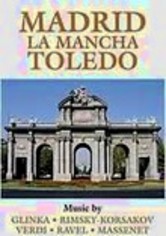 2006 NR 0h 56m DVD
This installment of the Musical Journey series takes you on a dizzying tour of Spain with stops in Madrid, Toledo and La Mancha, where Don Quixote famously fought his army of windmills. An authentic soundtrack includes works by artists who were inspired by the region, from Russian composers such as Rimsky-Korsakov and Glinka to European composers including Lalo, Massenet, Bizet, Verdi and Ravel.