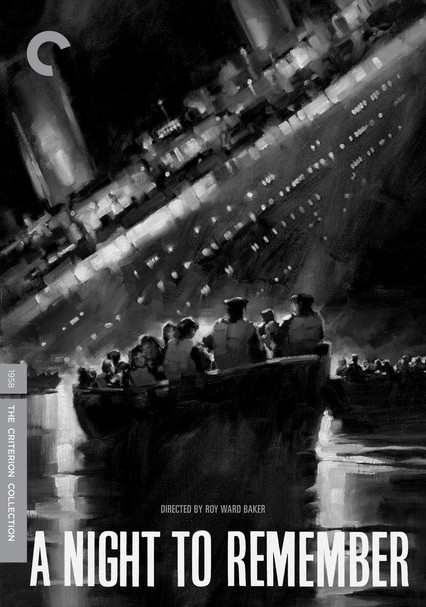 1958 NR 2h 3m DVD
The Titanic's dramatic final hours are depicted in this film version of Walters Lord's book. On its maiden voyage, the ship struck an iceberg in the North Atlantic on April 14, 1912, taking the lives of 1,513 passengers. The vessel's tragic sinking is accurately recounted and filmed in real time; it's only 37 minutes shorter than the real-life event. A documentary on the making of the movie and commentary by Titanic experts are included.

Parents need to know that A Night to Remember adheres more closely to the actual event than the better-known Hollywood depiction of the Titanic disaster. Filmed in near real-time to the actual disaster, many characters begin to realize that the odds of surviving are slim at best, and impending death is faced in many different manners. Also, characters are often seen smoking and drinking as they spend time in the lavish dining area or prepare to face death.

A character talks to his wife about picking up lingerie for her when the Titanic arrives in New York.

A character jumps off the Titanic to his certain death. A woman leaving the Titanic for one of the life boats gets trapped between the two before she's rescued. As panic ensues as the ship goes down, characters push, shove, and fight each other for survival. The ship ultimately sinks, and many are presumed dead.

In the midst of horrible tragedy, individuals find inner strength to face disaster with courage and bravery.

Characters smoke cigars and drink while they play cards. A member of the crew drinks an entire bottle of scotch in his quarters as the ship sinks. Other passengers are shown turning to drink as the Titanic takes on more and more water.