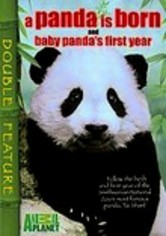 2005 NR 1h 24m DVD
This delightful pair of documentaries follows the painstaking but ultimately successful mating attempts of two panda bears at the Smithsonian National Zoo and their offspring's first year of life. In the first film, scientists investigate the low birthrate among pandas and use their findings to help Mei Xiang and Tian Tian produce a baby. Then, watch cuddly cub Tai Shan grow and explore the zoo habitat, from wobbly first steps to climbing trees.