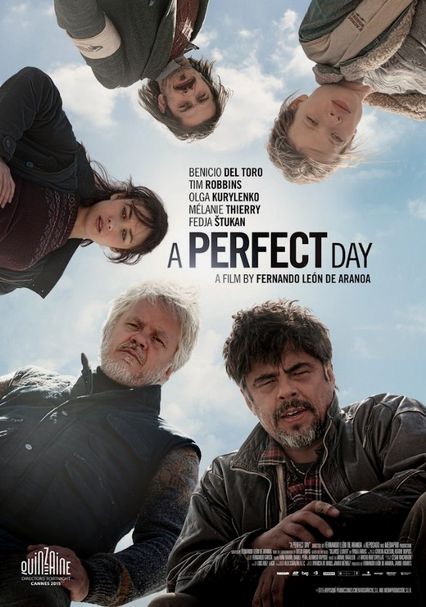 2016 R 1h 45m Blu-ray / DVD
Sent to a deadly combat zone to recover a corpse from a well -- where the body is contaminating a village's crucial water supply -- a motley group of aid workers finds the ostensibly simple job turning into a Sisyphean task.

Parents need to know that A Perfect Day is a drama about aid workers in the Balkans in 1995. Though the country is a war zone, violence is more hinted at than shown. The worst is a dead, bloated body in a well (the characters spend the entire movie trying to get it out). A hanged corpse is also briefly shown, dead cows in the road are potentially used to hide land mines, and a teen boy brandishes a gun. Language is strong ("f--k," "s--t") but infrequent; characters also talk about sex, but it's nothing too graphic, and they drink whiskey in one sequence. Though the movie is about aid workers, it doesn't really encourage viewers to choose the same path; the characters seem burnt out, doing the job more to avoid things than to help out. Still, the portrait the film paints is an interesting one.

Characters talking about having sex; not too graphic. Mention of "hookers."

Bloated dead body shown floating in a well; various other bodies shown -- hanged, etc. Dead cows in road. Some blood shown. Car accidentally runs into a kid in the street (he's OK). Teen boy with a gun. A vicious dog is given drugged meat. Prisoners of war are shown. Small wound on finger. Loud punk music.

Subtly promotes the idea of aid workers helping others, even if the message is a little muddled. The characters are, on the whole, trying to help others, but their reasons appear to be somewhat selfish.

Characters drink whiskey in one scene.