A Polish Vampire in Burbank 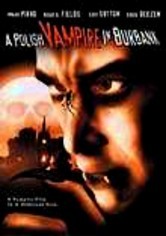 A Polish Vampire in Burbank

1985 NR 1h 24m DVD
Mark Pirro wrote, directed, produced and starred in this '80s vampire horror-comedy. A Polish vampire named Dupah has trouble biting people because he doesn't feel right doing it. His father and sister get tired of siphoning blood for Dupah, so they force him to go out and get his first victim. Of course, when he finally finds one, he falls in love with her! An entertaining tale with lots of silly (but funny) sight gags and plays on words.