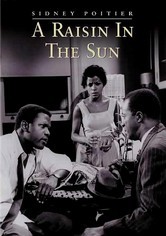 1961 NR 2h 8m DVD
Sidney Poitier and Ruby Dee shine in this film version of Lorraine Hansberry's play about an inner-city black family. Poitier plays Walter Lee Younger, a chauffeur with a wife (Dee) and family to support. When a financial windfall puts Younger's dream of starting his own business within reach, the family is plunged into conflict with one another and with the intolerant world around them.

Parents need to know that kids will be exposed to the prevailing overt prejudices of the early 1960s, against both minorities and women. Walter, the main character drinks in despair. Also, kids might have a hard time warming up to the stark black and white cinematography, the dialogue-heavy scenes left mostly intact from the play, and the single set, the families' apartment. However, this is one of the earliest movies to feature an all-African American cast and it addresses themes that remain relevant today, including the struggles of minorities (and in some part women, too) to attain the "great American dream."

A slap in the face.

Although they love each other, the family fights ferociously. Walter longs for a better life for himself, but even surrounded by three strong women, he is still the man of the family; he has final say in all decisions and believes women want little out of life for themselves.