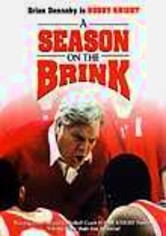 2002 R 1h 27m DVD
ESPN produced this film about fiery-tempered University of Indiana basketball coach Bobby Knight. Based on John Feinstein's best-selling book of the same name, the film chronicles the Hoosiers' 1985-86 season, when Knight granted Feinstein unprecedented access to the team and its practices, meetings and huddles. Brian Dennehy stars as Knight, who went to extreme lengths to ensure that his team didn't lose a game.