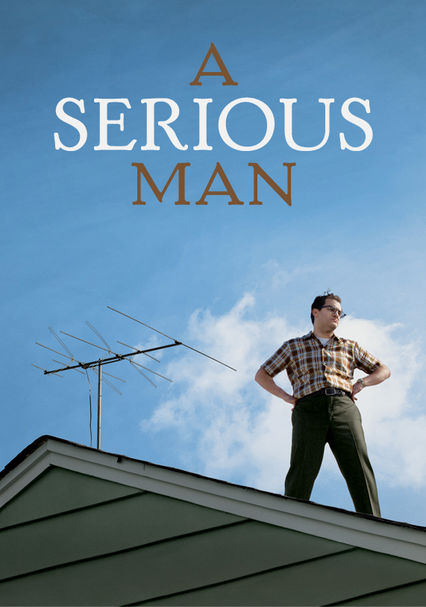 2009 R 1h 46m Blu-ray / DVD
Larry Gopnik has hit a "rough patch," according to a colleague, and it would seem so: People are dropping dead all around him, his wife wants a "get," and his whining kids only add to the heavy load. Can a few rabbis guide him to life's answers?

Parents need to know that the Coen brothers' A Serious Man features extensive useof marijuana (in some cases by pre-teen boys) and lots of profanity (from "f--k" and "s--t" on down the line). There's some sexual material as well (a distant view of a topless sunbather, a dream-sequence sex scene), and some brief but bloody moments of violence. The movie also offers viewers complex questions to ponder on the subjects of faith and religion.

A topless sunbather is seen from a distance; a dream sequence includes a sex scene in which a woman is wearing a bra and a man's bare chest is shown. Discussions of sex and infidelity.

Some violence, including a stabbing (with blood) in the prologue. There's also a shooting and a beating; these take place in dream sequences but are depicted with vigor and blood. The corpse of a hunted deer is also seen.

Amid the movie's acrid humor and mature subject matter is a good deal of food for thought -- if not a constructively positive take-away. The lead character struggles to do the right thing, and his actions have definitive consequences.

Characters drink wine and hard liquor and smoke pipes and cigarettes. Marijuana is also smoked -- in some cases by 12-year-old boys -- and discussed extensively.