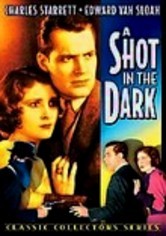 1935 NR 1h 8m DVD
When a wealthy college student (James Bush) is found hanging dead from a tree, his roommate (Charles Starrett) enlists the help of his detective father (Robert Warwick) to sift through the clues and uncover the killer. The plot thickens when the gumshoes determine that a sizable inheritance was involved. Meanwhile, an autopsy uncovers an even more startling piece of information: The boy was dead long before he was hung.