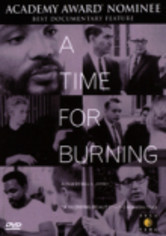 1966 NR 0h 58m DVD
Shot at the height of America's Civil Rights movement, Bill Jersey's controversial cinema-verité film (which was rejected by three major networks) examines the issue of race at a Lutheran church in Nebraska. The pastor encourages the white, middle-class congregation to reach out to local black Lutherans in a show of support, but tensions within the spiritual community run high as members of both races grapple with long-held prejudices.