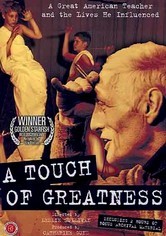 2004 NR 0h 53m DVD
When he became a teacher in the 1940s, Albert Cullum realized something was lacking in his classes and decided to stray from the by-the-book, discipline-heavy style favored by his colleagues, instead using poetry and drama to put life and emotion into his teaching. This documentary from Leslie Sullivan (produced by Catherine Gund) depicts a man who challenged traditional teaching methods and proved that creativity has a place in every classroom.