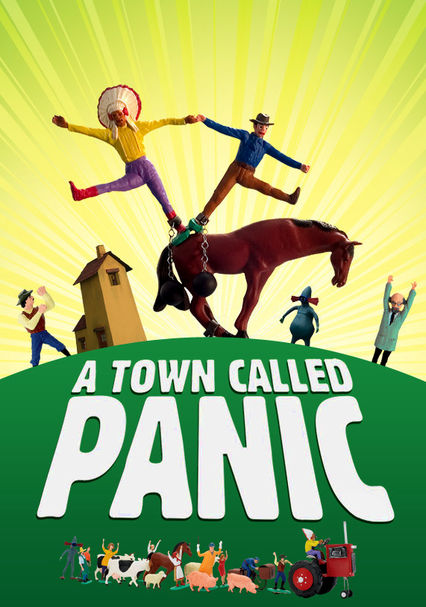 2009 NR 1h 15m DVD
This stop-motion adventure about a trio of plastic toys provides imaginative entertainment for viewers of all ages. Adapted from a TV series, the film follows Cowboy, Indian and Horse on a trip to the center of the Earth and beyond.

Parents need to know that A Town Called Panic is a funny, unconventional animated (and subtitled) film that will appeal to a wide age range. The simplicity of the subtitles make it an ideal first foreign language film for young readers; even little kids who can't yet read will enjoy the physical comedy and the very funny sounds of the French dialogue as it is heard here. Still, it's not for everyone: It's high-speed, frenetic, with lots of cartoon action -- catastrophes of the highest order (falls, raging waters, some sharp-toothed creature attacks, burial by giant snowball, and more). There is a sprinkling of profanity -- spoken in French, translated into subtitles ("bastard," "ass," "damn," "hell"). One all-night party finds the multi-specied characters (animals and humans are interrelated in this film) drinking beer and kir, some to excess.

Two horses fall in love; they dance and flirt.

Lots of cartoon action that is meant to be inventive and funny. No injuries or deaths -- everyone recovers in record time from even massive assaults. Stop-motion animated toys are victims of: tsunami, explosions, a fall to the core of the earth, an avalanche of bricks, evil scientists and their technology, a barracuda attack, a bear, and even a wooly mammoth.

No messages as such, but the film is a wonderful example of the pure joy associated with creativity and letting one's imagination take flight.

Beer and kir are served at an all-night birthday party; several characters drink too much.