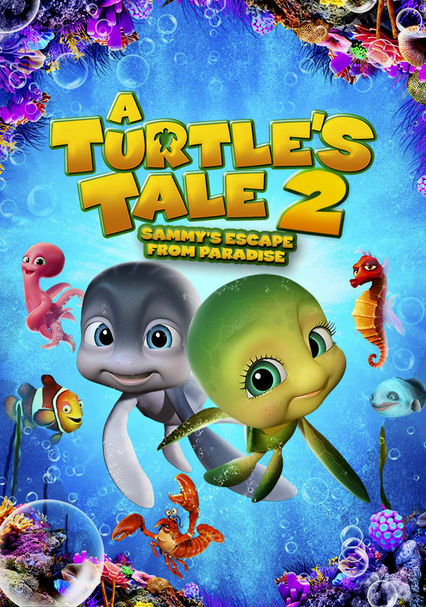 2012 NR 1h 33m DVD
In this animated sequel to A Turtle's Tale, Sammy the leatherback turtle and his best friend, Ray, are protecting hatchlings when seagulls attack. Soon, poachers separate the pair, shipping them off for display in an aquarium show.

Parents need to know that A Turtle's Tale 2 is the sequel to the Belgian animated adventure A Turtle's Tale: Sammy's Adventures and includes some scary scenes and characters, a villainous (albeit small) bully, and a lot more alcohol than is usually depicted in kids' movies. The alcohol is courtesy of the setting: an upscale underwater restaurant/aquarium, where bartenders make lots of cocktails for adult diners. There's also some romance between animal mates, as with the hogfish and the protagonist turtles when they reunite with their wives. Young kids will learn about various sea animals and their life cycles.

The Hogfish couple is very affectionate and kissy-kissy with each other. Ray and Sammy embrace with their mates.

The moment the turtles get caught in the net is rather scary, similar to Finding Nemo. Then, in the aquarium, the seahorse Big D acts like a mob boss and has dissenters "iced" by having them thrown into the freezing waters where the penguins live. An otherwise harmless shark puts a smaller sea animal into his mouth but doesn't kill him. The juvenile sea turtles are chased by an underwater predator.

This is a story of friendship and family and of overcoming the odds to save those you love. The movie also stresses that bullies come in all shapes and sizes and aren't always the biggest or most threatening-looking characters.

Most of the movie's action takes place at an upscale aquarium restaurant where adults drink cocktails with dinner and at the bar. Bartenders make a lot of showy cocktails for diners.