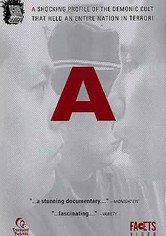 1998 NR 2h 16m DVD
In the aftermath of the 1995 sarin gas release in Tokyo's subway system, director Tatsuya Mori bravely went behind the scenes to chart the activities of Aum Shinrikyo, the group responsible for the attack. This riveting documentary -- two years in the making -- sheds light on the members' beliefs and daily routines, focusing on apprehensive spokesman Hiroshi Araki. Cameras capture the media frenzy that engulfed the cult and the public's outrage.