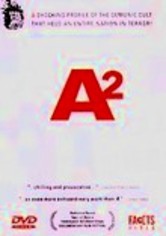 2001 NR 2h 11m DVD
Picking up where his A documentary left off, Japanese filmmaker Tatsuya Mori continues to follow the Aum Shinrikyo cult, the group responsible for a poisoned gas attack on a Tokyo subway station in 1995. The twist to A2 is that the cult -- a Japanese religious group that mixes Buddhist and Hindu beliefs -- is now operating under the watchful eye of mandatory surveillance, an aspect that gives the second film a whole new flavor.