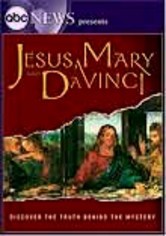 2004 NR 0h 55m DVD
Dan Brown's popular novel &NFiThe Da Vinci Code&NFi_; has shot to the top of the sales charts, propelled by the several controversial questions it poses. The book exposes a seemingly fine line between truth and narrative, questioning even the most standard Christian beliefs as told in the Bible. ABC News correspondent Elizabeth Vargas travels the world to determine whether &NFiThe Da Vinci Code&NFi_; is mere fiction or possibly much more.