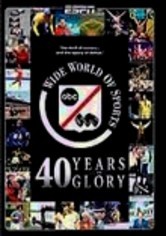 1961 NR 1h 9m DVD
Rediscover the top highlights of this popular television sports show, which allowed viewers to experience the thrill of victory and the agony of defeat. This program collects such milestones in sports history as Lance Armstrong's first Tour de France win and Nadia Comaneci's Olympic gold medal performances. The classic show won legions of fans by presenting such non-mainstream sports as hurling, rodeo, surfing and demolition derby.