AC/DC: Back in Black: A Classic Album Under Review 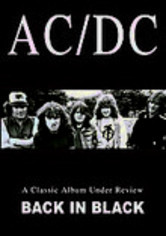 AC/DC: Back in Black: A Classic Album Under Review

2006 NR 1h 53m DVD
This in-depth retrospective revisits AC/DC's "Back in Black" (which sold more than 40 million copies), with track-by-track analysis of the landmark album that launched the Aussie rockers' career into the stratosphere. A team of experts including music journalist Malcolm Dome, recording engineer Tony Platt and band biographer Paul Stenning provides an insightful critique. Performance footage, a featurette and an AC/DC quiz round out the video.