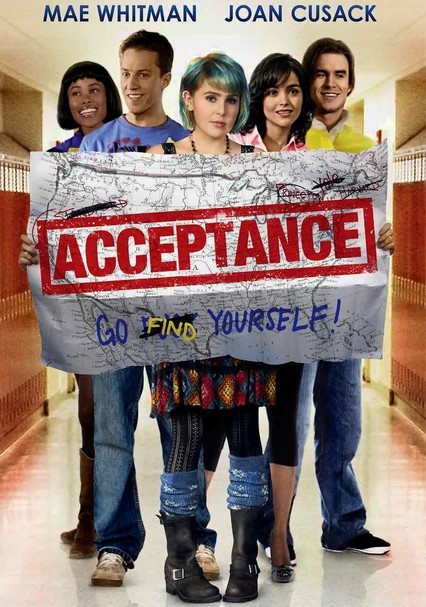 2009 NR 1h 28m DVD
High school senior Taylor (Mae Whitman) finds herself in a stand-off with her mother, Nina (Joan Cusack), who wants her to go Ivy League, while Taylor prefers a more modest college. She's also dealing with the fact that her parents' shaky marriage may not last much longer. Meanwhile, Taylor's friends Harry (Jonathan Keltz) and Maya (Deepti Daryanani) also obsess about their college prospects in this Lifetime Original Movie.

Parents need to know that although this heartfelt TV movie about high school seniors dealing with the pressures of the college admissions process is geared toward teens, it has some pretty strong content, including references to sex acts, make-out sessions, alcohol and prescription pill abuse, and compulsive stealing. One teen is even shown cutting herself (with bloody wounds visible) as a way of dealing with her stress and pain; another has inappropriate feelings for her teacher. Many of these heavy issues are discussed within the context of growing up and coping, and some are lightened by humor.

Sexual content ranges from teens making out to adults colleagues having an affair (nothing explicit shown). There are also references to infidelity and some quick mentions of sex clubs and sadomasochism. A student believes a teacher is in love with her.

One teen is shown cutting herself with scissors as a way of coping with her problems; the bloody wounds are visible on her arm. Some mild arguing between adults.

Teens learn a lot about accepting themselves and their parents during the course of the movie, but the lessons don't come easily. The kids are pressured by their parents to get accepted into Ivy League colleges; one character compulsively steals and cuts herself in order to cope with the stress. Family dysfunction, divorce, and adult dating are also addressed.

A parent appears to have a substance abuse (alcohol, prescription pills) problem.