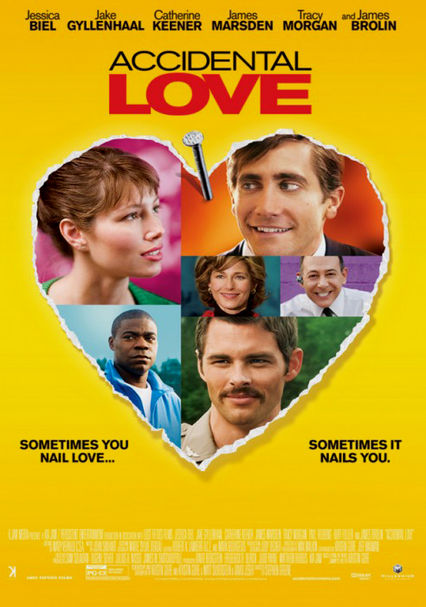 2015 PG-13 1h 41m Blu-ray / DVD
After a freak accident lodges a nail in uninsured Alice Eckle's (Jessica Biel) head, her crusade for health care takes her to Capitol Hill. But with her injury causing wild sexual urges, things are bound to get out of control in this romantic comedy. As naive congressman Howard Birdwell (Jake Gyllenhaal) takes up her cause, sparks fly between Alice and the young senator. But will love and politics make uneasy bedfellows?

Parents need to know that Accidental Love is a black comedy that exposes the not-so-noble inner workings of Washington, while focusing on a waitress who's the victim of an unfortunate industrial accident involving a nail gun. There's a good bit of swearing (including "s--t" and "f--k," sometimes spoken by a young girl) and some not-so-subtle sexual innuendo, as well as one sex scene that's over the top and played for humor. Nothing graphic is shown, but there are plenty of noises. A condom is seen on screen. There's a little fighting, characters duel with flaming torches, and there's some social drinking.

One sex scene, played partly for laughs, has plenty of noises and brief glimpses of hands or feet reaching into the frame -- the rest of the participants' bodies are off screen. A man and woman are seen briefly in their underwear. A woman talks about her sex life, with a few private details. Innuendo. Birth control (condom) is shown on screen.

Two men get into a brief scuffle. A men's group ritual involves a duel with flaming torches. The film starts with a mishap involving a nail gun.

Honesty will always prevail over deception, and people who lie will be exposed.

A Trojan condom gets some prime screen time at a key moment.

Adults drink while relaxing and socializing.