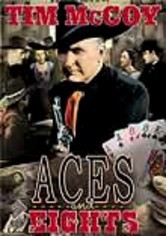 1936 NR 1h 2m DVD
Tim Madigan (Tim McCoy) may just be the last honest gambler there is in town in this thrilling Western. He doesn't carry any firearm and, though he's sharp at cards, won't ever think of cheating. When an unscrupulous player, Jose Hernandez (Red Lease), gets shot after a scuffle, he's convinced that Madigan's to blame. Now, Hernandez is after the truthful hero, who's also being hounded by Marshal Tom Barstow (Earle Hodgins).