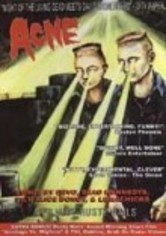 2005 NR 1h 22m DVD
Rusty Nails, the maker of B-movie flicks Blood Maker and Animated Corpse, brings the story of two teen zit zombies to the screen. Franny (Tracey Hayes) and Zooey (Rusty Nails) drink some bad water and turn into giant, oozing pimples. They try to figure out what's happening to them, but along the way, they start infecting other teens and becoming strangely addicted to chocolate. Soon, the Army is looking for them as they fight to stay alive.