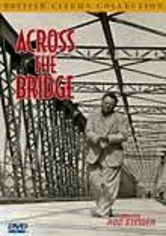 1957 NR 1h 43m DVD
Corrupt, misanthropic businessman Carl Schaffner (Rod Steiger) hops on a train to Mexico after embezzling funds from his company. During the trip, he decides to murder fellow passenger Paul Scarff (Bill Nagy) and assume his identity. But his plan goes awry when it turns out that Scarff was also a fugitive -- and is wanted in Mexico for a political assassination. This compelling psychological drama was based on a story by Graham Greene.