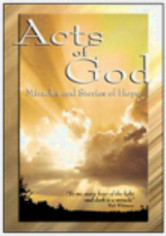 2005 NR 1h 0m DVD
In a 1991 cover story, &NFiLife&NFi_; magazine documented thousands of amazing, miraculous events that had happened to everyday people all over the world, one of the first mainstream news stories on the subject. Once considered a sign of mental weakness or religious fanaticism, belief in such miracles, in acts of the divine, has been growing. This inspiring documentary evaluates the scientific evidence and lets viewers come to their own conclusions.