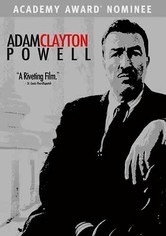 1989 NR 0h 54m DVD
Examining the life and work of civil rights leader Adam Clayton Powell, this Oscar-nominated documentary narrated by civil rights activist Julian Bond paints a portrait of a complex man who was able to do great things despite overwhelming obstacles. But the film also reveals aspects of Powell's darker side, including a series of failed marriages, his infamous clashes with Martin Luther King Jr. and his public censure in the U.S. Congress.