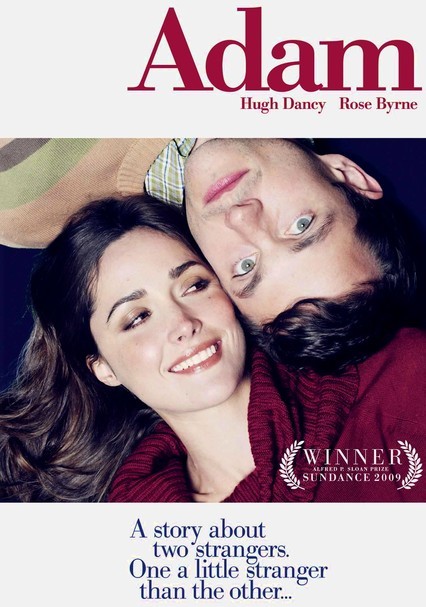 2009 PG-13 1h 39m DVD
When beautiful teacher Beth (Rose Byrne) moves into a nearby apartment, strangely awkward Adam (Hugh Dancy), who suffers from Asperger's syndrome, breaks through his limited social abilities and flirts with the young woman in this moving romance. Beth responds to Adam's unusual courtship, and as they overcome the obstacles to intimacy, they learn how to face life's other challenges. Max Mayer directs, while Peter Gallagher and Amy Irving co-star.

Parents need to know that, despite the marketing campaign, this romantic film about the unusual but deeply compassionate relationship between a man with a high-functioning form of autism and his new neighbor is more dramatic than comedic. There are frank discussions about sex, since the man's condition means that he always says exactly what he thinks, even about sensitive matters. Also, some characters are perplexed by Adam's autism and sometimes downright hostile.

Fairly frank discussion about sex and arousal. A couple has sex for the first time -- though there's no outright nudity, there's some kissing and tumbling in bed. She also places his hand in her bra. Later, a married man admits to having an affair.

A young man explodes in frustration; he screams and throws objects around, and the woman with him is afraid. But the tantrum doesn't appear directed toward her. Instead, it's fairly clear that it's because he can't control his overwhelming emotions. Another screaming match ensues later between father and daughter.

A young man with Asperger's syndrome (a form of autism) attempts to forge a connection with his neighbor, whose big heart allows her to see beyond his limitations. But the rest of the world isn't as embracing, and some scenes depict others being hostile to him. Still, the woman who loves him does so wholeheartedly, with little judgment.