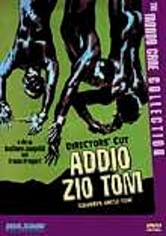 1971 UR 2h 16m DVD
Filmmakers Gualtiero Jacopetti and Franco Prosperi lensed this movie ostensibly to quash the notion that they were racists. Some scenes take place in 1970s America, and the filmmakers have taken pains to cast this movie with "real" actors adhering to a script. The time-travel premise takes a camera crew back to antebellum days in America where they shoot a "mondo" documentary on the slave trade (with scenes that often feature hundreds of extras).